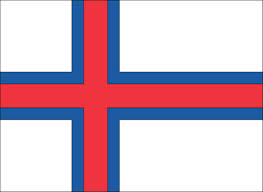 by R. King-Farlow. (with updates by the editor)

If questioned suddenly, the only thing that the average British Citizen might say about the Faroe Islands is that, to judge from the weather reports, they share with Iceland the distinction of being the point of origin of most of our more challenging weather. Closer investigation, however, shows that they possess other features of note, including some that are of decided interest to both the philatelist and the postal historian.

For one thing, although the Faroes are out beyond the Shetlands and well on the way to Iceland, they form an integral part of Denmark for postal purposes. A letter from Copenhagen to Thorshavn enjoys a nice three day sea voyage, but despite this it remains technically an “inland letter” and costs no more than one sent to, say, Roskilde, less than twenty miles away.

Another somewhat unexpected postal fact about the Faroes is that the inhabitants are better off for postal offices than the people of Denmark proper. At 31st March 1953, there were 1636 postal offices of one sort or another in Denmark, an average of 1 to every 2,700 inhabitants. Yet the Faroes boast no less than 39 offices for a population of only 31,700 or 1 to every 812 individuals.

The Faroes’ chief claim to philatelic fame comes, of course, from the provisional stamps to which they have twice had to have recourse through force of circumstances, in 1919 and in 1940/41.

From 1st January, 1919, the Danish Post Office, at rather short notice, raised the rate for local letters from 5 øre to 7 øre, and issued a new 7 øre stamp. Lack of shipping facilities delayed the arrival of supplies of the new stamps in the Faroes and the post offices had to do the best they could. They had plenty of 5 øre stamps on hand, but only limited quantities of 1 and 2 øre, and these latter were all used up within a couple of days or so.

The Post Office at Thorshavn was accordingly instructed by cable to bisect copies of the 4 Fire stamps, and to use the halves as 2 p(re. This was a very temporary measure, for by January 6th most of the 4 Fire supplies had been exhausted and recourse had to be had, again on cabled instructions, to the 4 ‘ire impressions printed on wrappers used for sending newspapers and suchlike. These impressions were cut out, bisected and then pasted on envelopes to serve as 2 Fire stamps, like the stamp bisects. However, the supply of wrappers in turn grew low, and On January 11th the authorities at Copenhagen cabled instructions that some of the 5 øre stamps should be surcharged locally to convert them to 2 øre.

Two days later, thanks to four odd bits of type, a piece of wood cut from a leg of a kitchen chair, and the ingenuity of a local carpenter, a handstamp was ready and was promptly used to produce what readers may know as S.G. 191, AFA 111, or Stella Fl, depending upon the catalogue they favour. The 2/5 øre were first produced on January 13th and some may actually have been used on that day. They were certainly in use on January 14th. 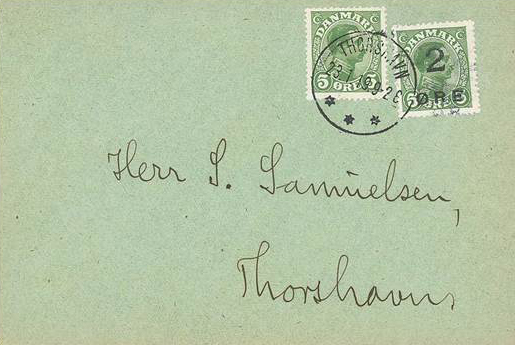 Only 155 sheets of the 5 øre were surcharged, so that the 2/5 øre should in theory be a far scarcer stamp than such majestic items as the 2 Rigsbank-Skilling of 1851-52 (4,793 sheets) and the rouletted 16 Skilling of 1863 (1,000 sheets). However, it must be borne in mind that by 1919 even people in such out of the way places as the Faroes knew that collectors were crazy enough to pay high prices for unusual stamps, whereas in the days of the classic issues stamps were no more than pieces of coloured paper, and were treated as such.

The proportion of the total issue of the 2/5 øre that has been preserved is thus much higher. The surcharged provisionals were of 2 øre denomination rather than 7 øre partly because this allowed people to use up the 5 øre stamps they already possessed, and partly because the 2 øre could also be used on printed 3 øre postcards to make up the new 5 øre postcard rate. 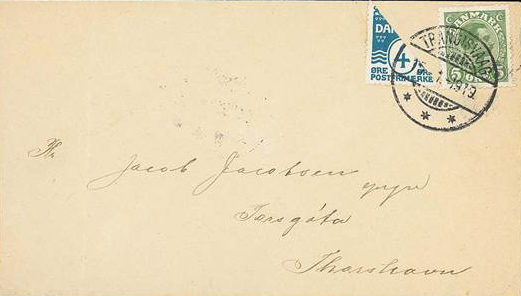 The new 7 øre stamps finally reached Thorshavn late on January 23rd, and the issue of provisionals was immediately discontinued. A few provisionals were, however, used at some of the outlying postal offices during the week following, and these 2/5 øre provisionals were not officially demonetised until 1st January, 1927, but it is doubtful if any were actually used after about 3oth January, 1919, and copies bearing postmarks after that date mu.,-2 be regarded as highly suspect.

The five provisionals of 1940/41 were a direct result of the War, for the occupation of Denmark by the Germans, and the Faroes by the British, naturally put a stop to any regular communications. Again, however, an increase in postal rates played an important part in the matter. From July 1st, 1940, Denmark raised the inland letter rate from 15 to 20 øre, and although direct control of the Faroes had been temporarily lost, the increase likewise applied there. As a result, there was an abnormal demand for 20 øre stamps as well as for 50 and 60 øre ones due to changes in certain rates for parcels and suchlike.

To meet the emergency, the postal staff at Thorshavn arranged locally for the surcharging of part of their stocks of stamps for which there was a lesser demand. Thus, 1401 sheets of the 15 øre red, Caravel type, were surcharged to 20 øre and placed on sale from 2nd November, 1940. Then in the following month 250 sheets of the 5 øre claret, and 175 sheets of the 6 Ore orange, of the wavy-line type were surcharged to 50 ore and 60 øre respectively, followed by a further 25 and 50 scots respectively, in April or May 1941. More 20 Ore provisionals were provided by surcharging 700 sheets of the 5 øre claret in March 1941, and 465 sheets of the 1 øre greenish black, in May 1941. All these provisionals are still valid for postal use in the Faroes, but not in Denmark proper.

Despite all these efforts, a desperate scarcity of stamps still existed, and no further provisionals could be provided since the stocks of even the least used values were running out. Some relief was obtained by the use at some of the major postal offices of handstamped franks instead of adhesive stamps, but the situation was absolutely critical when; early in June 1941, new supplies of stamps printed in Denmark at last reached Thorshavn through the U. P. U. at Berne.

Even then the problem was not entirely solved, for the new consignment contained no 5 øre stamps. The old stocks had been exhausted either by normal usage or by surcharging, and the denomination was much in demand as a supplementary value for making up the high rates. The Thorshavn officials wanted to avoid any further surcharging, so they took the very unusual and extreme step of selling 6 øre stamps for 5 øre. I have not been able to learn of any other example, in any country, of the post office selling single copies of current stamps for postal use at less than their face value. In all, 180 sheets of 6 øre stamps were used in this way as non-surcharged provisionals” before a supply of 5 øre stamps reached Thorshavn early in September 1941.

Quite apart from the provisionals, the Faroes provide a lot of philatelic interest through their postmarks, some of which are exceedingly scarce. Exactly the same types of postmarks as in Denmark proper have always been used, but it can be imagined that the volume of correspondence emanating from some tiny little fishing village on an outlying island, with only a few score of inhabitants, is not large, and that good examples of the cancellations from that village’s Collecting Office are none too easy to find.