St Thomas was a hub of the West Indies packet service from 1851 to 1885. Initially, mail was transported by a Spanish packet to and from Puerto Rico. In July 1867 the British picked up the mail contract and packet letters are known using British stamps as late as 1879.

The first postage stamp of the Danish West Indies was issued in 1856. It had the same square coat of arms design as the contemporary stamps of Denmark, but it was denominated 3 cents and of a dark carmine colour on yellowish paper. A yellow burelage of wavy lines covered the stamp. An 1866 re-issue was printed on white paper with the direction of the burelage lines changed, and in 1872 the stamps were perforated. In 1873 a 4c value in dull blue was issued.

In 1874 DWI issued new “numeral” design stamps, also mirroring Danish stamps. Most were printed in two colours, with a central oval containing the value, arms and country name, surrounded by a frame of intricate scrollwork usually printed in a different, contrasting colour. Nine denominations were issued, and over the 30+ years of use, there were numerous printing runs creating many shade varieties. Most issues also have an “inverted frame” variety where the plate of the scrollwork frame was inverted when printed.

As usual for small colonies far away, the Danish

West Indies ran out of popular values periodically, and the colonial administration had to improvise. A 1c surcharge was printed on 7c stamps in 1887 and a 10c surcharge on 50c in 1895. An additional supply of numeral types in new colours came out between 1896 and 1901.

Single-color 1c and 5c stamps were issued in 1900 to meet UPU regulations. Shortages of 2c and 8c values led to more surcharges in 1902, rectified in the following year by an issue of those values using the arms design of 1900. Postage due stamps first appeared in 1902 also. 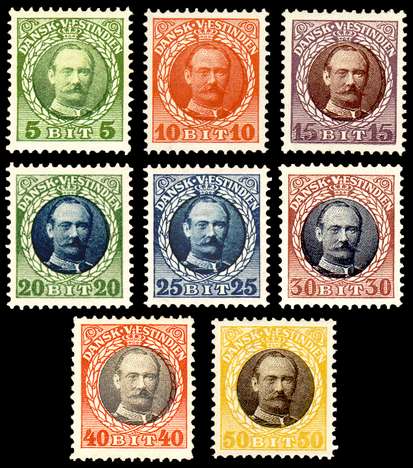 As a result of the currency reform in 1905, new stamps were issued. Values from 5b to 50b had a silhouette of King Christian IX, while 1fr, 2fr, and 5fr depicted the sailing ship Ingolf in St. Thomas harbour. New postage dues were required as well. Additional 5b stamps were produced by surcharging older stamps. A new definitive series in 1907 depicted Frederick VIII, followed in 1915 by a series for Christian X.