Attendance was again disappointing with only four members present – several members sent apologies for a variety of reasons. Nevertheless, the afternoon was interesting and entertaining with much to see and discuss. Low in numbers but high in quality and interest, it began at 2p.m.

Alan Totten spoke first with a display of Norwegian Parcel Cards showing a variety of rectangular and triangular dated cancellations. He showed cards for in-bound parcels subject to postage due and /or customs duty. The foreign parcel would be sent to Christiania, where any dues were assessed and then directed to the local office and the card passed to the parcel addressee. There was an envelope for the return of postage due payment with the appropriate postage due stamps cancelled on the reverse and a redirection request letter for a foreign incoming parcel. Cards for parcels from Bergen, Oslo, Stockholm, Germany and England. Insured mail and Porto labels were also in evidence.

Bill Ross then displayed a variety of early mail from Åland including a map showing the old post routes and a rate table for mail from Sweden/Finland to Helsingør and Hamburg. There were four “Crown” letters including a feather letter with a “post-haste” note. Early letters including one to Warrington from Grislehamn via Lübeck and Hamburg; an Embetsbrief from a vicar asking the police to check the foetus of a still-born child to eliminate the possibility of a crime; there were postcards of the office in Eckerö and the 350th Anniversary of the Finnish Post Office. Finally, a selection of Russian Cyrillic marks was included.

Peter Rooke batted next with a 10-sheet display showing the development of postmarks for Aarsdale on Bornholm, including the difficult to find skeleton Bro-IIIb bridge type and star cancels with and without stars. This was followed by 10 sheets of star cancellations on cover from brevsamlingssteder (letter collecting offices) subordinate to Roskilde, including Jyllinge, Kornerup, Lindenborg, Sæby, Ejby and Osted.

Alan Totten then gave a second round displaying Norwegian Military postcards 1884-1926. There were used for general correspondence, conscription and call-up for annual the two-week manœvres. There were single and double reply cards, which were post free until 1936, when ordinary postal rates applied and stamps were used. Some were returned undelivered when the person had disappeared – had the person gone abroad or possibly into the woods to avoid their commitment?   They were an interesting group of items. 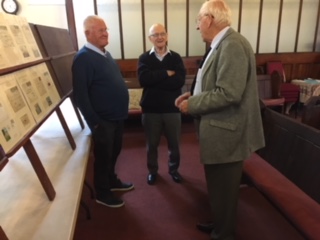 Bill Ross followed with a second display of Philatelic Exhibitions in Finland from 1928. There were special covers, stamps and entrance tickets to be seen, including one with a special event cover for a military flight cachet; also covers from various Nordia exhibitions and the special stamps, mini-sheets etc. produced by the Swedish Post office for these exhibitions. Whilst the display was predominantly “philatelic” it was agreed that it was a very attractive collection with good visual impact.

Peter Rooke finished the afternoon with a selection of sheets showing early mail to and from Sorø, with two maps showing the location of the Post Office and the Telegraph Office; the famous Sorø Academy featured in two of these letters, one being addressed to the Professor Caspar Wegener in 1831. There were then a series of letters from a pupil at the school between 1922 to 1929, addressed to his father in Shanghai, Port Said and Genoa and sent at different times via Canada, Suez and Siberia and taking between 42 and 25 days to get there.

Light refreshments were available, thanks to Arthur Jennion, who had also arranged the meeting, which finished at 5pm.