There are plenty of opportunities for the advanced collector to specialise, yet there are few stamps so expensive that you can't afford to build a near-complete collection

Choose from any of the countries

Most maintain a fairly conservative stamp issuing policy, so it's reasonable for collectors to keep up with new issues.

The Chance to Specialise

A popular area of specialisation in Scandinavian Philately is collection of town cancels. Some people try to collect every town; some collect just their "home" county, or an area in which they have a special interest.

Other areas of Interest

The Bicolours are among the most attractive and interesting of the "classic" stamps in the world, and are also among the most studied, making them a good issue for beginning and advanced specialists alike. Since several have low catalogue values, it can also be an affordable speciality.

Welcome to the Scandinavia Philatelic Society

Welcome to the SPS website.
We hope you like the look of the Society website. We regularly update various aspects and we are always open to suggestions and offers of content. The members’ area offers access to the full Contact magazine archive in PDF form, fully indexed and viewable right in your browser, and all articles are made available, search-able from the box on the right. All Society members are entitled to a login username and password, which will be sent to you by email, or by request by contacting: admin@scandps.org.uk.

The Society was founded in the United Kingdom in 1952 as the Scandinavian Collectors Club, to promote the collection of Stamps, Postcards and Postal History of greater Scandinavia. That is Denmark, Faroe Islands, Finland, Greenland, Norway, Sweden, Iceland, Åland Islands and also the former Danish Colony of Danish West Indies and the Norwegian Territory of Spitsbergen.

We meet regularly in the United Kingdom and hold an AGM weekend, usually in the spring just before Easter. These are informal events, visitors are welcome and dates are published here on the website. Scandinavia Philatelic Society publishes an award winning quarterly magazine journal, “Scandinavian Contact”, with news, research and other articles for its members. New members are always welcome and initial enquiries should be made to Susan Oliver at: secretary@scandps.org.uk 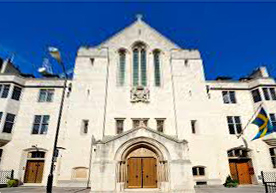 The handful of of founder members sat round a table in the Library of the Swedish Church in Harcourt Street, Marylebone, London and from that day the society has grown into a Society of some 300 members, the majority of which are resident in the U.K. but the membership does extend overseas.
An advertisement appeared in 1952 in the pages of "Stamp Collecting Weekly" inviting applications for membership to those interested in Scandinavian philately and in the first four years 165 members were enrolled. Meetings have been held in the Swedish Church since the first days of the Society, and they were sometimes prefixed by a visit to the Harcourt Arms opposite and sometimes a post-meeting visit also took place. The occasional Christmas party was arranged, hosted by Eiler Hansen at the Danish Embassy and the now non-existent Danish Food Centre.